Link to this page

Jupiter and Io
Order a Hand-Painted Reproduction of this Painting 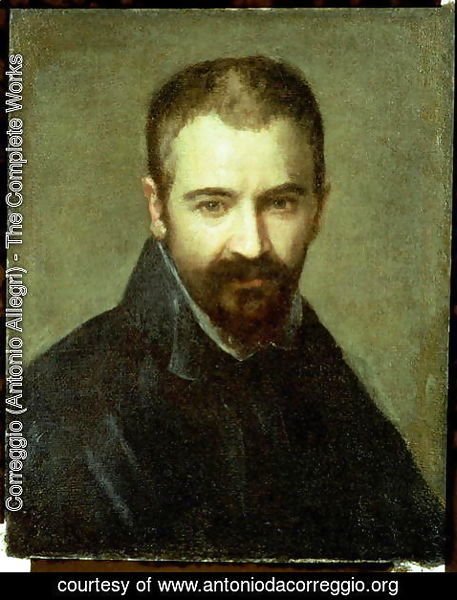 Antonio Allegri da Correggio was born in Correggio, a small town near Reggio Emilia. His date of birth is uncertain (around 1489). His father was a merchant. Otherwise, little is known about Correggio's life or training. In the years 1503-1505 he apprenticed to Francesco Bianchi Ferrara of Modena. Here he probably knew the classicism of artists like Lorenzo Costa and Francesco Francia, evidence of which can be found in his first works. After a trip to Mantua in 1506, he returned to Correggio, where he stayed until 1510. To this period is assigned the Adoration of the Child with St. Elizabeth and John, which shows clear influences from Costa and Mantegna. In 1514 he probably finished three tondos for the entrance of the church of Sant'Andrea in Mantua, and then returned to Correggio: here, as an independent and increasingly renowned artist, he signed a contract for the Madonna altarpiece in the local monastery of St. Francis (now in the Dresden Gemaldegalerie). 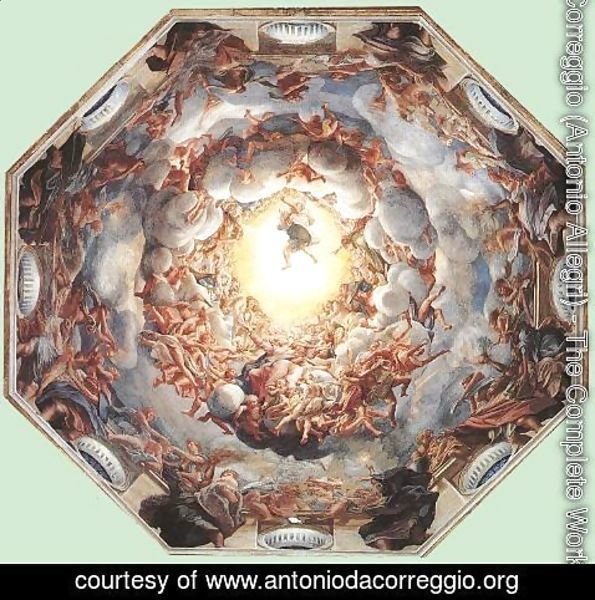 By 1516, Correggio was in Parma, where he generally remained for the rest of his career. Here, he befriended Michelangelo Anselmi, a prominent Mannerist painter. In 1519 he married Girolama Francesca di Braghetis, also of Correggio, who died in 1529. One of his sons, Pomponio Allegri, became an undistinguished painter. From this period are the Madonna and Child with the Young Saint John, Christ Leaving His Mother and the lost Madonna of Albinea.

Correggio's first major commission (February-September of 1519) was the decoration ceiling of the private dining salon of the mother-superior (abbess Giovanna Piacenza) of the Convent of St Paul, called the Camera di San Paolo (Parma). Here he painted a delightful arbor pierced by oculi opening to glimpses of playful cherubs. Below the oculi are lunnetes with monochromic marble images. The fireplace is frescoed with an image of Diana. The iconography of the unit is complex, joining images of classical marbles to whimsical colorful bambini. While it recalls the secular frescoes of the pleasure palace of the Villa Farnesina in Rome, it is also a strikingly novel form of interior decoration.

He next painted the illusionistic Vision of St. John on Patmos (1520-21) for the dome of the church of San Giovanni Evangelista. Three years later he decorated the dome of the Cathedral of Parma with a startling Assumption of the Virgin, crowded with layers of receding figures in Melozzo's perspective (from down to up). These two works would represent a highly novel treatment of dome decoration, using an illusionistic sotto in su perspective, and would exert a profound influence upon future fresco artists, from Carlo Cignani in his fresco Assumption of the Virgin, in the cathedral church of Forli, to Gaudenzio Ferrari in his frescoes for the cupola of Santa Maria dei Miracoli in Saronno, to Pordenone in his now-lost fresco from Treviso, and to the baroque elaborations of Lanfranco and Baciccio in Roman churches. The massing of spectators in a vortex, creating both narrative and decoration, the illusionistic obliteration of the architectural roof-plane, and thrusting perspective towards divine infinity, was a device without precedent, and which depended on the extrapolation of the mechanics of perspective. The recession and movement implied by the figures all presage the dynamism that would characterize baroque painting.

Other masterpieces include The Lamentation and The Martyrdom of Four Saints, both at the Galleria Nazionale of Parma. The Lamentation is haunted by a lambence rarely seen in Italian painting prior to this time. The Martyrdom is also remarkable for resembling later Baroque compositions such as Bernini's (Truth) and Ercole Ferrata's (Death of Saint Agnes), showing a gleeful saint entering martyrdom. 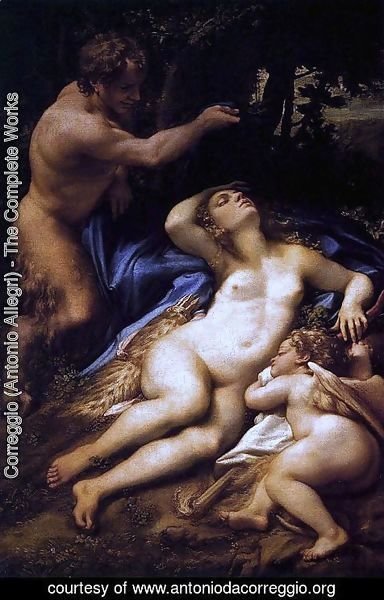 Mythological series based on Ovid's Metamorphoses

Aside from his religious output, Correggio conceived a now-famous set of paintings depicting the Loves of Jupiter as described in Ovid's Metamorphoses. The voluptuous series was commissioned by Federico II Gonzaga of Mantua, probably to decorate his private Ovid Room in the Palazzo Te. However, they were given to the visiting Holy Roman Emperor Charles V and thus left Italy within years of their completion.

Leda and the Swan, now in Staatliche Museen of Berlin, is a tumult of incidents: in the centre Leda straddles a swan, and on the right, a shy but satisfied maiden. Danae, now in Rome's Borghese Gallery, depicts the maiden as she is impregnated by a curtain of gilded divine rain. Her lower torso semi-obscured by sheets, Danae appears more demure and gleeful than Titian's 1545 version of the same topic, where the rain is more accurately numismatic. The picture once called Antiope and the Satyr is now correctly identified as Venus and Cupid with a Satyr. 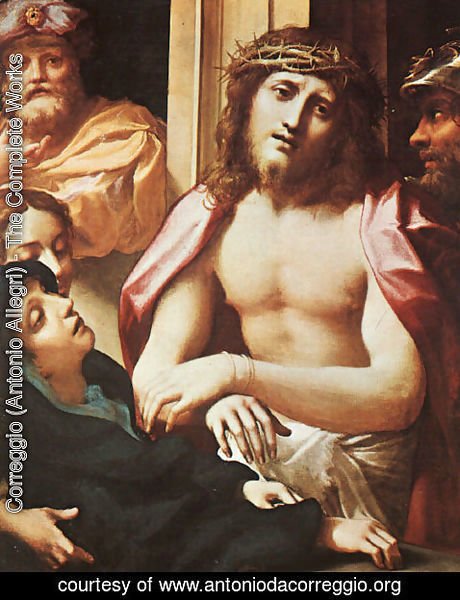 Correggio was remembered by his contemporaries as a shadowy, melancholic and introverted character, traits possibly conditioned by his birth into a large and poor family.

Correggio is an enigmatic and eclectic artist, and it is not always possible to identify a stylistic link between his paintings. He appears to have emerged out of no major apprenticeship, and to have had little immediate influence in terms of apprenticed successors, but his works are now considered to have been revolutionary and influential on subsequent artists. A century after his death Correggio's work was well known to Vasari, who felt that he had not had enough "Roman" exposure to make him a better painter. In the 18th and 19th centuries, his works were often remembered in the diaries of foreign visitors to Italy, which led to a reevaluation of his art during the period of Romanticism. The flight of the Madonna in the vault of the cupola of the Cathedral of Parma inspired numerous scenographical decorations in lay and religious palaces during the 20th centuries.

Corregio's illusionistic experiments, in which imaginary spaces replace the natural reality, seem to prefigure many elements of Mannerist and Baroque stylistic approaches. In other words, he appears to have fostered artistic grandchildren, despite having no direct disciples outside of Parma, where he was influential on the work of Giovanni Maria Francesco Rondani, Parmigianino, Bernardo Gatti, and Giorgio Gandini del Grano. His son, Pomponio Allegri became a painter.

In addition to the influence of Costa, there are echoes of Mantegna's style in his work, and a response to Leonardo da Vinci, as well. (From Wikipedia)

Report an error on this page